English Way from A Coruña

The English Way was one of the most frequently used pilgrimage routes in medieval Europe to reach Compostela along the coast. Pilgrims from Scandinavia, the Netherlands, the north of France and mainly England, Ireland and Scotland reached the north of Spain by ship, entering Galicia via the ports of Ribadeo, Viveiro, Ferrol or A Coruña. These latter two ports, situated on a a wide gulf the Romans called Portus Magnum Artabrorum, became traditionally consolidated as the starting points of the two alternatives of the English Way. Seafarers reached the port guided by the light beam from the Torre de Hércules, a Roman lighthouse that was declared a World Heritage Site in 2009.

Once on land, both alternative routes converge in the parish of Bruma, in the municipal district of Mesía, and they go all the way to Compostela crossing the lands of Cambre, Carral, Mesón do Vento, Ordes and Oroso, to name but a few.

There is documentary evidence of pilgrimages from the Nordic countries and the British Isles dating back to the 12th century. Hence, in the year 1147 a squadron of crusaders landed in the port of A Coruña. The squadron was on its way to the Holy Land and, before taking part in the conquest of Lisbon in support of the first king of Portugal in his fight against the Arabs, it made a stopover in Santiago to visit the Apostle's tomb.

From 1154 to 1159, an Icelandic monk called Nicholas Bergsson left written testimony of the first sea voyage from Iceland to the Kiel Channel, on the border between Denmark and Germany, and from there on foot to Rome, on the way to Jerusalem. From then on, this would be the route used by the majority of pilgrims from the Nordic countries on their way to Santiago.

Subsequently, during the Hundred Years' War ( 14th - 15th centuries), it was the British who used their ships to reach Santiago; their presence is evidenced by the coins and pieces of pottery found during excavations in the cathedral.

Another fact demonstrating the importance of the British pilgrimage is the offering of such important gifts as a portable alabaster altarpiece, showing five scenes in the life of St. James the Apostle, which was given to the cathedral by the clergyman John Goodyear in 1456.

The origin of the pilgrims that did that route is also certified through the deaths registered and kept in the archives of the chapels and cemeteries of the monasteries and hospitals along the way, and in particular those belonging to the Sancti Spiritus Hospital Order, which were amalgamated to those of the Franciscan Order as of the 14th century.

The variant of the English Way which starts in A Coruña, begins its route at the Church of Santiago, founded at the beginning of the 13th century. From here it continues to Puerta Real and along Avenida de la Marina with its emblematic galleries dating from the 14th century, going all the way to Los Cantones. Following Sánchez Bregua and Linares Rivas streets, we come to the Plaza de Cuatro Caminos, and along Fernández Latorre and Pérez Arda streets we reach the Eirís district of the city. We go from the municipality of A Coruña to that of Culleredo through O Portazgo, then taking the O Burgo seaside promenade where we can see the Romanesque Church of Santiago and the 12th century mills of Acea de Ama. The route continues through Alvedro, crosses the medieval bridge at A Xira over the River Valiñas and enters the municipality of Cambre, through the parish of Sigrás with its Romanesque church, to head on towards Sobrecarreira and enter the municipality of Carral through San Martín de Tabeaio and crosses the villages of Corpo Santo, Belvís, Sergude and Cañás. The route makes yet another change of municipality in Abegondo, through the population centres of San Xoán de Sarandóns (Aquelabanda) 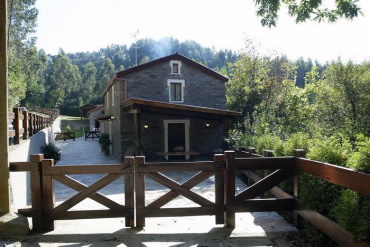 This village house is located in surroundings of nature, on the River Abelleira, and was known as the “Casa del Molinero Francisco” (House of Francisco the Miller). The house has 4 double bedrooms and 2 singles, all with an en-suite bathroom, in addition to a lounge and dining-room. The establishment is associated with the Costa da Egoa – Molinos de Batán Ecomuseum, and visitors can enjoy a route along the River Abelleira with 14 water mills with weirs and waterfalls, largely joined up by stone water channels.

Through the village of O Rueiro, we come to the municipality of Carral to then go through O Peito and As Travesas. A short section separates Vento from kilometre point 42,702 which belongs to the district of Mesía where the itinerary joins up with the variant from Ferrol, until it reaches Bruma. Leaving Bruma, with its remains of the ancient medieval pilgrims' hospital behind us, the route takes us on to the municipality of Ordes, passing through O Seixo, Cabeza de Lobo and crosses the parish of Ardemil, to carry on to A Carreira, As Mámoas and A Carballeira. On passing through A Rúa, home to the Church of San Paio de Buscás, we leave Trabe mill and O Cubo bridge behind us and carry on towards Outeiro de Abaixo, taking a wooded track which leads to the Church of San Xiao de Poulo in Outeiro de Arriba. The path continues until it reaches the small hamlet of A Calle. 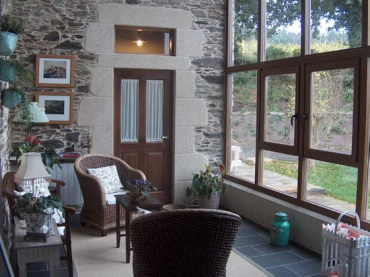 The establishment, located in the village of O Outeiro, is a former farmhouse, that is over 250 years old. The original structure of the main building and the adjacent hórreo (raised granary), restored using natural materials such as stone, clay, granite and timber make for a cosy setting, representative of rural Galician architecture.

The route passes through Carballo, crossing Casanova de Pereiro until it gets to A Ponte Pereira bridge, which is possibly of medieval origin. After crossing A Ponte Pereira, the path goes into a wood to cross through Carrás, a grazing land with numerous springs that often make this route impassable at this point. We carry on to Baxoia and reach Sigüeiro, a town of medieval origin (12th century) and the current administrative head of the municipality of Oroso. Once in the population centre, we continue along the Rúa Real, ending up at the medieval bridge over the River Tambre. After crossing the bridge, the route enters the city of Santiago running parallel to the river, all the way to the Church of Barciela and carries on to the so-called “Fonte do Inglés”. It goes past the area of Tambre, heading towards Meixonfrío, entering the urban centre of Santiago along the Cruceiro de A Coruña, passing in front of the administrative buildings of the Regional Government of Galicia and the pilgrim monument by Jose María Acuña, to carry on along the streets of A Pastoriza, Basquiños and Santa Clara, with the monumental Baroque facade of the Convent of the Order of St. Clare. The route continues along Rúa Loureiros to the Porta da Pena gate, all the way up to the Praza de San Martiño Pinario. It carries on along Rúa da Troia and joins up with Rúa da Acibechería at the northern facade of Santiago Cathedral.

The route is 75 kilometres, which is covered in 3 days / 3 stages with the Bono Iacobus.. At the end of each stage, walkers are collected from the last stretch of their route and taken by car to nearby rural accommodation, where they spend the night, following a well-deserved homemade supper cooked with local products.

In the morning, after a filling breakfast, the pilgrim can once again be taken by car to the beginning of the route for the day.

The BONO IACOBUS can be reserved all year long except Easter and the month of August either individually, for couples or groups. For further information about the BONO IACOBUS please call us on (+34) 902 190 160 / +34 981 568 521 or send us an e-mail: info@galiciaincoming.com.
(*) Distributed through legally authorised Travel Agents.

How to arrive at A Coruña

The information concerning operating days, timetables and journey times are GUIDELINES only, and should be confirmed with the company operating the service.