The pilgrimage to Santiago de Compostela achieved considerable importance in Portugal, whose inhabitants actively contributed to the development of the cult of St James.

As early as in the 12th century pilgrims were already setting out from the major cities of Galicia’s neighbouring country such as Lisbon, Coimbra, Porto and Braga. Although the basic reason for undertaking this journey of pilgrimage was a religious one, the centuries-long flow of people who travelled the roads leading to Santiago also helped to establish strong two-way bonds in matters of culture, the economy and thought.

A Torre do Xudeu
Tui / Inicio 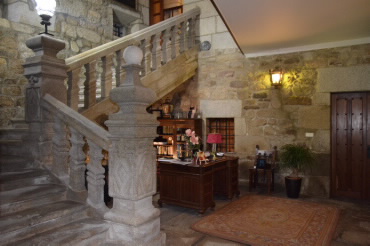 The charming hotel A Torre do Xudeu, is enclosed in a magnificent lordly house, with more than three centuries of history. Situated in the historical center of Tui's town that is crossed by the Way of Saint James, it is an ideal place for rest and enjoyment of its clients.

On leaving the city we can stop to admire the eleventh-century church of San Salvador de Rebordáns, built in Romanesque style. Continuing on our way towards Porriño we pass the chapel dedicated to the Virxe do Camiño, before dropping down to the River San Simón where we will find a bridge known as A Ponte das Febres. We then reach A Madalena and continue onwards to Ribadelouro. Leaving Gándaras de Budiño to the east, we pass through the old streets in the centre of Porriño before heading towards Mos. Here we walk up the sloping street known as Rua dos Cabaleiros, where we will be rewarded at the end by the sight of a valuable eighteenth-century stone cross. Following the route, we pass the centuries-old Roman milestone at Vilar de Infesta and cross the area of level ground known as Chan das Pipas. We follow the Roman road, whose course takes us back to the N-550 before it enters Redondela, marked by the monastery of Vilavella. 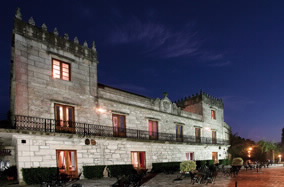 Torres de Agrelo is a noble historical architectural whole which dates back to 1750. Situated in an area with views over the estuary of Vigo and the San Simón island, this country house is set in eighty thousand square metres of gardens, with numerous landscaped areas and arboreal species that are unique to Galicia. It has been a Franciscan convent, a military hospital in the First World War and a refuge during the Civil War (parts of the underground tunnels that ran between the buildings remain intact).

After passing the railway bridge the route takes us into a wood. We go downhill through the hamlet of Setefontes before crossing Arcade, famous for its oysters, and continue to the bridge over the River Verdugo at Ponte Sampaio, crossing the village of the same name and climbing up along its narrow alleys and streets.

We then reach Canicouva and continue on our way, passing beside a stone cross at Cacheiro and the ruins of a former coaching inn. The route takes us through several villages before it enters Pontevedra along the Avenida Conde de Bugallal, leaving along the Rúa da Santiña. Once in the city, you can visit the Virxe da Peregrina sanctuary, point of reference for pilgrims’ devotions. The stage will end crossing the Lérez River over the Ponte do Burgo. 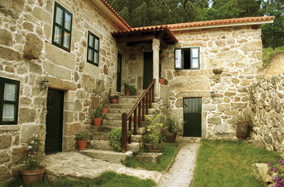 Casal de Folgueiras has belonged to the family since 1680 and offers travellers the tranquility and relaxing atmosphere of facilities which include gardens, orchards and private woodland. Located in the centre of the Rías Baixas, this house, which has hardly changed since it was built in the 18th century, offers travellers the conveniences which are now sought in an entirely rural setting.

The Way runs parallel to railway line as far as Pontecabras, where it heads off in a northerly direction until it reaches the church and rectory at Santa María de Alba. Leaving behind us the chapel dedicated to San Caetano, we go deep into the thick woods of Reiriz and Lombo da Maceira. From San Mauro the route heads towards the village of Ponte Balbón, which boasts two interesting stone crosses, one next to the manor house known as Casa de Amonisa. On the shaft of the other, St James the Pilgrim shows travellers which direction to take. From Ponte Balbón we make for the shrine dedicated to Santa Lucía, in Amenal, before passing through Tibo, with its drinking fountain, stone cross and public washplace, after which we soon find ourselves in Caldas de Reis. 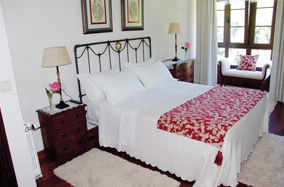 "Torre do Río" was built upon the ruins of a textile complex dating from the 18th century. Situated above the Umia river in a spot declared an area of natural interest due to its extraordinary beauty, this house is just over a kilometre from the centre of the thermal spa town of Caldas de Reis.

The route leaves Caldas de Reis and enters the valley of the River Bermaña, surrounded by ancient woodlands, with the Romanesque church of Santa María de Vemil to one side. A gentle ascent brings us to Santa Mariña de Carracedo, with its monumental church, rectory and granary. Continuing on our way through the hamlets of Casal de Irixo and O Pino we re-enter wooded land on the slopes of Monte Albor. At the mill at Solleiro the route turns towards San Miguel de Valga before reaching the village of Infesta, in Pontecesures. As we walk along the Rúa dos Coengos we pass by the church of San Xulián de Requeixo on our way to the Roman bridge that gives its name to the town. Once on the other side of the river, the route runs parallel to the N-550 all the way to Padrón. 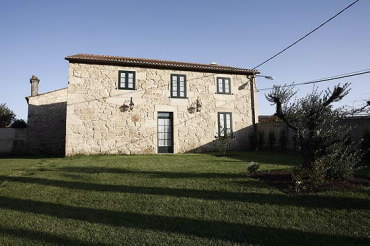 A Casa da Meixida is a rustic hotel which in its day was an old 19th century farmhouse; it has been totally rebuilt and restored, retaining its original structure. It still has the feel of a rustic building, with its solid walls and the quality provided by noble materials such as wood and stone. 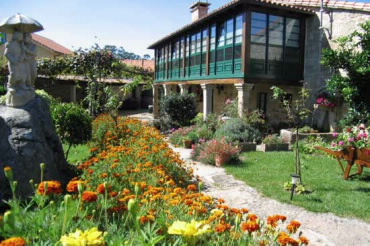 Casa Marcelo, a farmhouse dating from 1898 which was restored and refitted in 1993, conserving the architecture which characterises this type of house. It is located in the tranquil and picturesque valley of the Ulla river, which is famous for lamprey fishing, and next to Herbón, renowned the world over for the Padrón peppers it grows.

Leaving the historical town centre of Padrón behind us, we make first for Iria Flavia and from there to the shrine at A Escravitude. Almost immediately afterwards we come across the church of Santa María de Cruces, after walking through a stretch of woodland and crossing the railway line at the picturesque village of Angueira de Suso. We then continue towards Rúa de Francos, with its beautiful Gothic stone cross. A detour leads to the ruins of Castro Lupario, a name that evokes the memory of the domains of Queen Lupa. From now onwards we will pass through a series of increasingly more densely populated villages and towns, crossing Milladoiro on its way to Agro dos Monteiros. The old medieval road leaves the ruins of the archbishop’s castle at Rocha Vella to one side before we reach the outlying suburb of A Choupana, close to the shrine to Santa Marta. We finally enter the old quarter of Compostela through Porta Faxeira, one of the seven gates that were once the only way of passing through the long-gone city walls, and access the Cathedral through the Romanesque door in the square known as Praza das Praterías.

The route is 115 kilometres, which is covered in 6 days / 5 stages with the Bono Iacobus.. At the end of each stage, walkers are collected from the last stretch of their route and taken by car to nearby rural accommodation, where they spend the night, following a well-deserved homemade supper cooked with local products.

In the morning, after a filling breakfast, the pilgrim can once again be taken by car to the beginning of the route for the day.

The BONO IACOBUS can be reserved all year long except Easter and the month of August either individually, for couples or groups. For further information about the BONO IACOBUS please call us on (+34) 902 190 160 / +34 981 568 521 or send us an e-mail: info@galiciaincoming.com

How to arrive at Tui

The information concerning operating days, timetables and journey times are GUIDELINES only, and should be confirmed with the company operating the service.