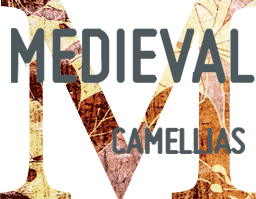 A journey through time. The camellias in the pazo of Rubiáns live in a garden pervaded by medieval shadows.

A garden which slowly moves down the paths of time. The eucalyptus has been here since the 18th century, and over there, a couple of magnolias whose origins go back to the founding of the house. Everywhere you go, time seems to provide us with road signs which explain everything about the garden. Have those magnolias really been there since 1380? Perhaps Rubiáns had the unusual privilege of being present at the birth, childhood and adolescence of these ancient magnolias. What other house can say the same?

For centuries the camellias have been “choosing their own way”, spreading where they will, no less ancient for being frivolous and gay. They redeem the garden’s sobriety, and their rose-like pallor contrasts with the solid demeanour of the Pazo.

They come in many colours: shades of yellow, white, fuchsia, and of course red. One famous variety is called «Eugenia de Montijo» named in honour of a famous red-headed empress who was born in the midst of an earthquake in the city of Granada, and whose very name implies the colour red, an appropriate shade for the special character of this pazo, whose medieval sobriety is enlivened each winter by its camellias.