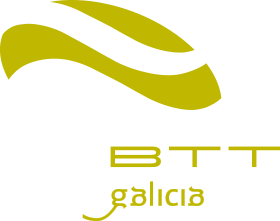 You can see the details of the different routes on a computer or GPS with GPX. and KMZ. files. The GPX co-ordinates are GPS data exchange files and need the right programme to import them into your GPS. The KMZ co-ordinates are files with geographical data that can be seen with the free programme Google Earth.

After leaving the meeting point at the Luíntra sports centre, the trail descends towards Baldomar, running through a forested area with oaks and chestnuts along a wide path with a good surface. The path then narrows and becomes more technical on the ascent.

After reaching the village of Monteverde, you can stop to visit Moura Necropolis, located 750 metres above sea level. You will see the half-buried ruins of up to seven funerary structures dating from the Neolithic Age.

From here, an extremely beautiful descent along a path running between stone walls leads to San Lorenzo in Biduedo Chapel, where you will need to stop and catch your breath before tackling the climb along a paved section to Pombar. After following a stretch of the route shared with Route 2 - Nogueira de Ramuín Circular close to Cortecadela, the route continues to Alto do Bidueiro, heading towards the village of Mundín before returning to its starting point.

Along several sections, the MTB route coincides with the Maquino Largaño, Transourensán and Camino Natural de Santo Estevo trails. Caution is advised along these sections as you may encounter hikers.

This route begins at Santo Estevo de Ribas de Sil Monastery. After covering the steep gradient on the early part of the route, we recommend visiting Litoria, a castro (pre-Roman fortified settlement) just a few metres off the path, to take in the incredible panoramic view of the monastery and Sil River Canyon.

The route continues on to Cortecadela and then follows a forest track until the turn-off for A Virxe do Monte Chapel. Accompanied by the windmills of the Sil Wind Farm, the route crosses through repopulated areas of scots pine to an altitude of 1,150 metres in the Cabeza de Meda Mountains, on the boundary between the municipalities of Esgos, Xunqueira de Espadanedo and Nogueira de Ramuín.

The trail then descends to the village of O Coutiño, sharing the final metres of this section with Route 3 - Parada de Sil Circular, which ascends in the opposite direction. At this point, you can stop at the O Picotiño and Cabezoá viewpoints, which are signed along the route. Following the Transourensán Trail, this stretch of the route includes sections of track and paved trail, passing the Pé do Home Viewpoint, the village of Vilar and Santa María Church before returning to the monastery.

This route begins near the town hall building in Parada de Sil, sharing its initial section with Route 4 - Os Torgais. After leaving Chamoso, the route continues on to O Couto and O Coutiño, where it connects to Route 2 - Nogueira de Ramuín Circular, which runs in the opposite direction from O Mato.

Continuing along the lower slopes of Mount Meda, along tracks and paths, the route passes through the villages of Guendón and Casa do Vento, where it begins a descent that leads to A Hedrada Reservoir. A path running parallel to the shore will take you to Pradomao, which offers a lovely panoramic view of the entire reservoir. Upon reaching Forcas Cemetery, after crossing through a small meadow, the route follows a gorgeous path which links up with Route 5 - A Fábrica da Luz and continues on to the village of Santo André.

This section of the trail passes the small settlements of Calvos, Purdeus, O Valado and A Casalta. On reaching the mills at Entrambosríos, there is a tough climb along a rocky path. We recommend porting your bike for about fifteen minutes until you reach the road to get your energy back.

The final section of the route runs along a path that climbs up to Pardela before ending in Parada de Sil.

Leave Parada de Sil at the spot known as Fondo de Vila and head towards the “Foxo do Lobo” (wolf pit) along a cart path, passing several of the chestnut drying huts known as sequeiros.

A good track leads to Os Torgais Viewpoint and then on to a spot known as “Balcones de Madrid”. This extraordinary viewpoint is where street merchants who sold rolled wafers, a profession with a long tradition in the entire Ribeira Sacra region, once bid farewell to their families. When these Parada de Sil natives set off, they would usually say that they were ‘going to Madrid’, giving one of the most extraordinary spots from which to view the Sil River Canyon its name.

After a descent along a cobbled path, the route comes to Portela. A paved trail climbs up to San Antonio Chapel. After crossing the road which leads to Santa Cristina Monastery, it continues on to the village of Santa Mariña. This section is shared with Route 3 - Parada de Sil Circular, which runs in the opposite direction. It is therefore advisable to exercise caution.

Santa Cristina Monastery is one of the most delightful spiritual centres in the Ribeira Sacra region and well worth a visit. ‘Ribas de Sil’ was added to its name in 1508, when it became part of Santo Estevo de Ribas de Sil Monastery, serving as the priorate. Apart from the history contained within its walls, the spectacular Romanesque style church with Gothic elements is especially noteworthy.

This route has three distinguishing features: the local relief, which includes steep gradients; the Mao River Canyon, which marks the municipal boundary of A Teixeira; and the pipes leading to Regueiro Hydropower Plant, which divide the area and can only be crossed at specific points.

The route begins at the meeting point at A Fábrica da Luz, one of the first parts of Galicia’s hydroelectric infrastructure built in the early 20th century. It has now been converted into a hostel. The route then climbs three kilometres along a paved path to San Lourenzo, where it is possible to visit San Vítor Necropolis.

It then descends to the Sil River Canyon and continues on a good path along the riverbank to A Barxa, which marks the start of a climb up to A Costrela.

To cross the pipes that supply water to Regueiro Hydropower Plant, you will need to cross a small bridge and then port your bike a short distance between some of the area’s traditional vineyards.

The next section runs along a hillside on a path by the edge of the canyon, offering a view of the mouth of the Mao River where it flows into the Sil. From Barxacova, continue along the riverbank to a dirt track with a steep gradient, which ends at the road that leads back to the hostel at A Fábrica da Luz.

Before or after your ride, we recommend visiting the elevated wooden walkway along the Mao River Canyon that forms part of an easy hiking trail running from the car park at A Fábrica da Luz to Barxacova.