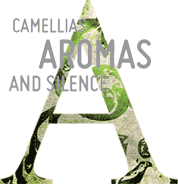 «La nada, aquí» -epitaph appears within the garden walls- The sculptor created the art, and the Pazo provided the legend.

Near the pier in the gardens of the Pazo of Mariñán there is a marble plaque with the inscription «la nada, aquí» which literally means, “Here is nothing”. No one is sure whether this refers to philosophical or religious matters, or even a disheartening epitaph on a gravestone, but this certainly inspires us to think, it awakens our curiosity, and adds to the Pazo’s legend. Above all because this stone has a wavy shape, just like the cameos that women wore pinned close to their bosoms. Could this refer to something which happened one night at full moon, two men in cloaks, in a boat with a lady? One thing is for sure, a murder took place.

Clearly the murder victim came back from the spirit world as a ghost, to show his beloved the futility of our human existence: “Here, there is nothing”, “Sic transit gloria mundi” reads his memorial stone on the wall which separates the Pazo from the river. The lady’s wave-shaped cameo slipped through her fingers, and she instantly crossed over to the “spirit world” and has never again been seen in our world, not even as a ghost.

Centuries later, on a visit to the site of the tragedy during a full moon, the sculptor unconsciously revived the memory of the oddly-shaped cameo. The legend says that any traveller who is prepared to face the Unknown may repeat this experience, when there is a full moon.

To find the magical spot at which these events occurred, whether the story be true or imaginary requires that first you must walk through a park, filled with fragrances and silence, a route replete with camellias surrounded by the rich dark green aroma of a eucalyptus forest, bay trees, lavender and the box hedges of a labyrinth. The dewy buds of the camellias tell us that the river is nearby.

Mariñán’s camellias gaze across to the other side of the river. There are some canoes, a house and an occasional train which transport the traveller’s dreams to places unknown, oblivious to time. The stone reads “Here there is nothing” because in Mariñán eternity takes the shape of a camellia.